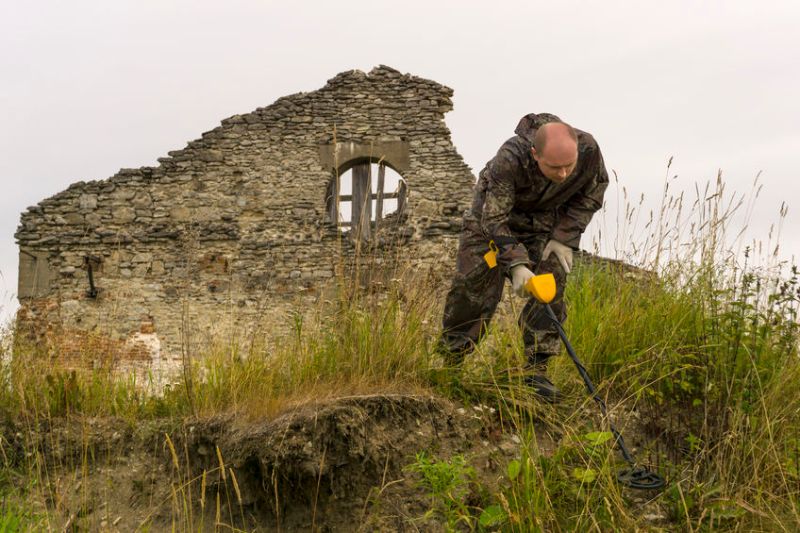 Are you eager to explore outside your home state or cross oceans to the other side of the world?

Globetrotting just got even better with the promise of finding hidden stashes of treasure. If you’re up to getting your passport renewed and you have the cash to burn, you may just come away richer in experience with rare pieces added to your collection.

If you’re looking to bring your favorite metal detector along on your vacation, or you want to plan your next trip around your hobby, here are some hot destinations metal detectorists must consider.

These locations have deep roots with legends of buried loot and cursed treasure. Learning the history, traveling, and putting boots on the ground of foreign territory is only part of the fun. Finding the long-lost cache is even more rewarding.

Even if you leave with empty pockets, the experience of the hunt is worth it. Who knows, you may find other significant objects or encounter otherworldly entities. Do your research, get the right metal detector for the job, and enjoy the plane ride.

Oak Island on Nova Scotia along Eastern Canada has a long history of housing hidden treasures of various kinds, and it is a dream hunt for many diehard detectorists. It has been sought-after detecting ground for over 200 years and has only been made more popular thanks to the History Channel’s “The Curse of Oak Island.”

You may want to get in on the hunt of the “Money Pit.” It’s a pit that is believed to have buried pirate loot but is elaborately booby-trapped to flood with water in preventing looters from recovering this treasure. Finding old coins are a definite possibility.

Mainly, Florida coasts. This state is a promising location for hobbyists as sunken treasure and shipwrecks are many. Namely, the 300-year old 1715 Spanish fleet that consisted of 11 treasure-laden ships sunk during a hurricane. It’s known as the treasure trove that keeps on giving, and your chances of finding loot is just as good as anyone else’s, as long as you have the right metal detector that can handle the conditions of the beach and underwater hunting.

Crystal Coast may already be a hot spot for family vacations, but you may be ignorant to the fact that it was once Blackbeard’s stomping grounds back in 1718. No one really knows what his intentions were for Beaufort where he settled for a short time. But, it is known that he split his loot and it hasn’t been seen since. His ship was recovered in 1996, and its artifacts are on display at the North Carolina Maritime Museum. As to his treasure, it’s rumored that there are four possible locations near and on Ocracoke Island that may just be where the “X” marks the spot. Take your detector on your next vacation to North Carolina and see if you can outsmart old Blackbeard.

There have been multiple hot spots in the UK that have proved to be worthy hunting grounds, but Norfolk has consistently pumped out the most finds. Historic treasure, as defined by UK coroners, are objects over 300 years old along with other qualifications. So, while many “treasures” are found, few are classed as legitimate treasure.

East Anglia has a long history of human activity between the locals, Saxons, and Vikings. Farming, plowing, and modern agriculture may be the reason why detectorists are continuously unearthing relics, coins, and other objects that may very well be classed as treasure that holds enormous amounts of history. There is still a lot of finds that go unreported. Your chances of finding farmland to scour and come up productive are high.

This area of Ethiopia is actually considered one of the most complex civilizations in Africa. The ancient empire was the first sub-Saharan African state to mint their own coins. Between unearthing lost cities, having rumored to hold the Ark of the Covenant, influenced by both Christianity and Islam, and there is evidence of Roman culture, Aksum is a treasure trove just waiting to be discovered. There is yet more to understand about this ancient kingdom and large parts of it remain unexplored. Give the archeologists a helping hand by scouring the land for potential finds that may yet bring even more history to light.

You may have driven through Kanab several times on your way to a more exciting vacation destination, but you may not have realized that its sands and canyons may be harboring King Montezuma gold – Aztec treasure. What were they doing in Utah? Some believe they considered it their homeland and others that they were passing through with the King’s gold to keep it from being looted by Spanish conquistadors.

Three Lakes Ranch has said to be the area where the treasure is hidden. It’s also said to be buried inside a cave next to a pond that required a 35-foot hole to dig that was then filled with water. To make things even harder to detect, it’s said that the Aztec warriors killed each other so that their spirits would protect the gold. If that doesn’t creep you out, people who have sought this gold and their loved ones have died. Equipment has mysteriously failed. Hefty fines and consequences from state and federal agencies have been enforced. Is it cursed? Take your detector out and you tell us!

If the name of the beach isn’t obvious enough, it was once an accidental, popular R&R spot for pirates – for their final rest. Their bodies would washup on shore from Dead Chest Island, and where there are pirates, there’s treasure. To add to the mystery and to fuel the addiction to finding gold, it’s been noted that there were feuding farmers who would hide their valuables on the island. Are you pirate enough to find it? You can always enjoy the scuba diving and tanning on the beach for a bit of R&R yourself.

Arizona and gold are two sides of the same coin. Famous counties for gold hunting are Yuma, Yavapai, Maricopa, Cochise, and Mojave. While there are many, many active mines within the entire state, there are also hundreds of abandoned mines that are worth checking out with your metal detector. Be sure to look for natural indicators that may lead you to undiscovered placer deposits.

Tombstone may invoke many-a-favorite’s law man Wyatt Earp, but it was first coined as a silver producing area. Search the outskirts, abandoned mines, and desert for silver and gold.

You may also want to head North from Tombstone to Superstition Mountains to seek out the Lost Dutchman’s treasure. Jacob Waltz, aka The Lost Dutchman, supposedly stumbled upon a concentrated gold mine that is now considered one of the most famous lost mines in America. There are many fragments to the Dutchman’s tale, but some have died trying to piece together the clues and locate it.

The land Down Under is one of the best places in the world to go metal detecting. Not only do you get to hop with the kangaroos, you can earn your stripes by sweating bucketloads to detect the largest gold nuggets or best finds of your life.

Consider the Umpherston Sinkhole at Mount Gambier, the underground mining town of Coober Pedy in North Adelaide, or the Pink Lake of North Perth. Not only will you have a heck of time detecting, you’ll enjoy the natural beauty of these Australian landmarks. Of course, they have multiple beaches and many shipwrecks for underwater hunting waiting to be explored.

The country is so big that you may want to consider joining an Australian outback expedition team that hits popular sites as well as trails off the beaten path.

It doesn’t matter if you’re on vacation, trespassing is still trespassing if you don’t have permission to metal detect. When planning your trip, make sure you save a lot of time for research. Research the history, the area, the right tools and detector for the job, and what the local, state, and country’s laws are for metal detecting. The last thing you need is to be stuck with hefty fines or returning without your metal detector as the best possible scenario. What’s the worst that could happen? Just don’t go there. Do your research and know the laws before you fly or drive.

Detect for the History

Metal detecting to get rich may prove to be a disappointing venture, especially if you’re looking to recoup your travel expenses and accommodation costs with your finds. Most archeological, historic, and significant finds belong to the state, government, museums, and the like, and as such, they are not yours to claim. However, some organizations may compensate you for finding them. Instead of looking for fame and riches, detect for the history.

Unearthing centuries-old treasure and relics will certainly get your name written down in the books, but it’s the experience and recovery of the unknown that you’ve brought to light which is, in and of itself, priceless.

This metal detecting vacation will be an unforgettable one.

Back to Where to Metal Detect Guides