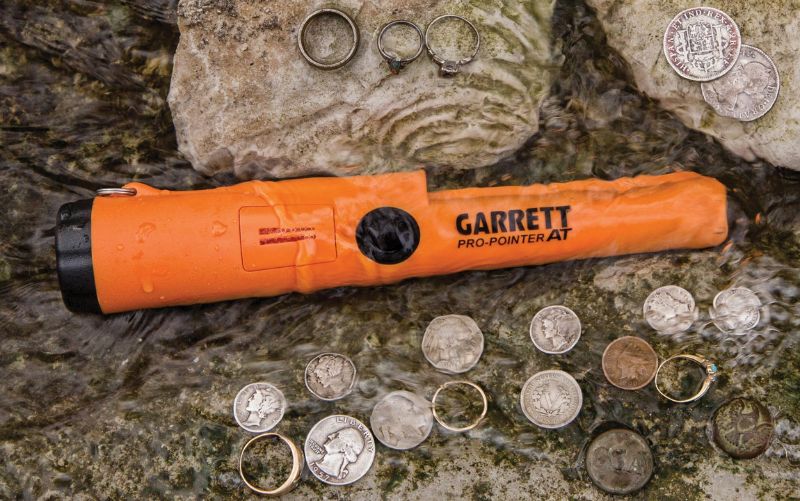 How To Use A Metal Detecting Pinpointer Like A Pro

You’ve just bought your first pinpointer but you’re unsure of how to use it effectively in the field. Don’t worry, you’re not the only one.

Many new to the metal detecting hobby or those who haven’t mastered the art of using a pinpointer aren’t yet convinced of its function and benefits. It may be due to ignorance, user error, or past, bad experiences with an inferior pinpointer.

Here, I’ll clear the air about how to best use a pinpointer for metal detecting and will answer commonly asked questions about its performance.

Let’s get to the point.

What is a Pinpointer?

To check out the best pinpointers currently in the market, features to look for, and the benefits for those who need them, see my complete pinpointer buying guide.

How to Use a Pinpointer for Metal Detecting

Even though pinpointers vary by make and model, they essentially have the same function. Turn it on, scan and point, and recover your target. While the operating instructions may vary slightly, these are the general guidelines to using a pinpointer.

Before Using a Pinpointer

If the target was dug up within the piles of dirt that you’ve brought to the surface, there’s no need to pull out the pinpointer. But, not all targets are buried so shallowly nor are they in convenient locations to pinpoint with a searchcoil. For tight and tough spots and deeply buried objects, pull the pinpointer after following the above instructions. Continue to next set of instructions.

After Using a Pinpointer

Making Adjustments on a Pinpointer

Pinpointers are straightforward and easy-to-use devices. There’s not a whole lot to it, but when it comes time to make adjustments, it may be a little confusing due to the one-button operation. Here’s a guideline on how to figure out configurations.

Some pinpointers may have adjustable sensitivity and they may offer 3-5 levels. You must look at how these adjustments are made on a pinpointer as it may influence your decision towards one or another. For example, the Minelab Pro Find 35 has + and – buttons whereas all adjustments are made through one button on the Garrett AT Pro Pointer.

There is nothing special you must do except find it. Say, after recovering your target you forget to pick it up and pack it away, it gets forgotten on the ground where you plugged your hole where it’s left on without use for about five minutes. This will automatically cause the pinpointer to emit a series of audible alerts that is different for every model. The time it emits these lost alarm alerts before automatically powering off is also different for every model. The average time is about 5-10 mins, but some can provide alerts for up to an hour.

Most of the time, a single button is the same button for everything from on/off to settings adjustments and retune. When this is the case, a single press activates the pinpointer, a quick-press automatically retunes/calibrates it, and a long press activates settings where consecutive presses selects the sensitivity or vibration and/or audio modes.

Having trouble using your pinpointer? I’ll lay out some common issues that you may experience and how to deal with them while in the field.

1. Not Locating a Target in a Hole

Your metal detector says there’s something there but the pinpointer can’t find it. The target could be buried deeper than what the pinpointer can detect. Dig a little deeper. If you’re not getting a signal at all from pointing the tip into the hole, check the sides of the walls by side-scanning. Hold the pinpointer in a vertical position and side-scan by moving the pinpointer left and right. If a signal is detected, use the tip to find the target.

The pinpointer provides a strong signal but can’t pinpoint the target. This could indicate both a large and deep object. If you’re getting a loud and strong signal in the hole but you’re not recovering anything, it could be buried deeper and the loud signal strength may indicate a large object. Detune the pinpointer. If you do not get a signal, side-scan the walls and/or dig a little deeper until you get a signal. Repeat this process until you find the object.

3. Pinpoint Before you Dig

Not all metal detectors handle trashy sites very well, and if this is the case, you can use your pinpointer as a metal detector as a last resort. Obviously, you’ll want to grid and focus on one area at a time. Once you’ve removed most of the trash, you can turn on your metal detector, preferably with a sniper coil, to detect good objects. If this is something you find yourself doing more often than not, it’s probably best that you upgrade your metal detector.

5. Pinpointer Lost Alarm Alerts Even Though It’s Not Lost

You may have been seated in one spot for longer than you anticipated maybe due to examining a find or rearranging your gear and adjusting detector settings. Before long, your pinpointer starts chirping noisily – this is normal as it’s a lost alarm that has been activated by disuse during a certain amount of time while it was left on. Just “reset” the pinpointer by powering it off. Turn on again if needed.

6. Use the LED Flashlight

It’s there for a reason – use it. Illuminate the hole, get sights on your target, and remove it with the least amount of damage as possible.

What are the best Pinpointers?

Pinpointers come and go and other models have been around for the ages. The most popular pinpointers that the masses have ranked and rated as the best in the market are undoubtedly the Minelab Pro Find 35, Garrett AT Pro Pointer and Fisher F-Pulse.

How Much do Pinpointers Cost?

Pinpointers generally cost between $50-$200. The better models will start at $100, have 360-degree scanning, and are somewhat waterproof. Cheaper models may function reliably, but maximum depth detection, adjustable sensitivity, retuning, and additional features will vary.

Is a Metal Detector Affected by a Pinpointer?

The metal detector’s currents run in circles (called eddy currents) and can pick up on your pinpointer that may be attached to your hip and causes it to generate its own electromagnetic field – even when the pinpointer is switched off. This signal is then processed and what do ya know – the detector is falsing to your pinpointer. Usually, detectorists will remove the battery from the pinpointer or relocate it to another pocket or inside a pack to prevent this issue.

One solution is to consider the Minelab Pro Find detector that has DIF technology that has circuitry that disconnects both the battery and coil inside the pinpointer so that no currents are generated and detected.

Can a Pinpointer Ignore Unwanted Targets?

Some can, however a pinpointer’s job is to narrow down a target’s location and help you precisely detect it when within close range. Most pinpointers are basically a one-tone device that detects all types of both ferrous and non-ferrous metallic objects.

How to Pinpoint with a Searchcoil?

Many detectors have an electronic pinpoint function built in. Using a concentric searchcoil makes it easier to pinpoint effectively, but a DD coil will require some practice. The idea is to sweep slow, low, and parallel to ground with a space of about 1-2”. Once you’ve hit metal, start sweeping in an “X” pattern. You must make a mental note of where the signal is the strongest and that would be the center of your imaginary X. Read the user manual on how to master this technique using the searchcoil, and then pull out the pinpointer to pinpoint the target’s location.

A Pinpointer Should Pinpoint

It’s a detector’s job to detect metal and a pinpointer’s job to pinpoint it. Although they both help you to find and recover metal, they each have their own strong points. Pinpointers are compact, easy-to-use, and target recovery is much improved over a searchcoil. For the price, they’re definitely worth buying as a must-have essential in your metal detecting arsenal.

Back to How to Metal Detect Guides